I vividly remember twelve days ago, sitting in what she said was the oldest wine bar in the world when, all of a sudden, unprovoked she started saying something irrelevantly mean about me. Like the conversation, my reaction was slow, which gave her an opportunity to divert what she was about to say in a different direction.

My eyes that warned her she was about to hurt me, saw her tongue briefly being held in hesitation. There's always a reason if someone chooses not to save face. In this case, it felt like she wanted to test out hurting me, to see how uncomfortable it would make her feel. As the unveiled insult was consciously pushed into my silence, my train of thought was conducted away from the situation, towards the carriages that would take me away from the city. They weren't due to depart Euston until the next day.

Over the next 24 hours, we didn't leave each other's side, as arranged. At one point we had sex that threw the hotel room's phone across the floor. In the cold light of day, she ended too many sentences calling me “baby”. Optimistically, I hoped she was doing it to remind herself why we were there in the first place. Cynically, I feared it was a tactic to keep me around despite the way she was treating me. I'm pretty sure there's some truth in both explanations, but in any case, the obvious insincerity made my skin crawl.

I remember people used to refer to me as “the zoom host” just because I was fast. Back then the internet was just a fancy fax machine, one with a few extra sockets, all of which crammed dangerously to the brim with wires. Me and my pals didn't care for any calls: not re, not courtesy nor video. As for bad connection, well, that was something only adults could have; at the time we had yet to grow up.

I awoke this morning wanting to return to sleep, but didn't for an hour or few. I'm not sure what I ended up having would call itself a nap or the continuation of night, but I am sure that shortly after my second awakening I entered my truck in order to drive it. I don’t like guzzling the earth's resources, but it's preferable to wasting the carpet staring at the extravagantly thick day. Hands on the wheel stopped at least three cigarettes from being smoked by my mouth.

I thoroughly enjoyed the trucking because I ate a so-called “wrap of the day” from a McDonalds restaurant, like I'm known to often do. Then I toured the best crannies of the city, even though I don't know of any yet. Like many other places, it's home to architecture and at weekends there is culture. I won't be able to live in the nooks of the city because I'm a stranger in them. There are other ones nearby, I think. It will be something I won't learn until I bring my truck to them.

The world is always changing, making it impossible to ever be sure. I sometimes feel like my big decisions pass by like rumbles of distant traffic. Crossroads and consequences blend into each other; I often forget that this day is the first of the test of my life. I had always thought I would have decided what I was going to be by the time I was 25. I didn't realise I'd never have to choose.

Because I'm essentially without a goal, decisions can seem absurd, from what I'm going to eat, to where I'm going to work. In decision I find indecision and in indecision ambivalence is my defense mechanism against a fear of the unknown. But the indifference I feel in the moment is more towards ownership than outcomes. I care about outcomes because they are my life. I just wish I didn't feel responsible for them. It's difficult to make or understand a choice when the succeeding narrative is yet to materialise.

Only hindsight can fill in the detail. In all the jobs I've had, I've only left when I've reached a comfort zone, once I've turned fear of inadequacy into confidence. I've been sad to leave every job I've ever had but have only ever done so with enthusiasm for the next. The same is true of lovers, who have come and gone like passing relation ships in the night. Decisions don't pass me by, I just have a reluctance to admit accountability for the future.

I've had less desire to write this year, instead I've curated an exhibition of other things: 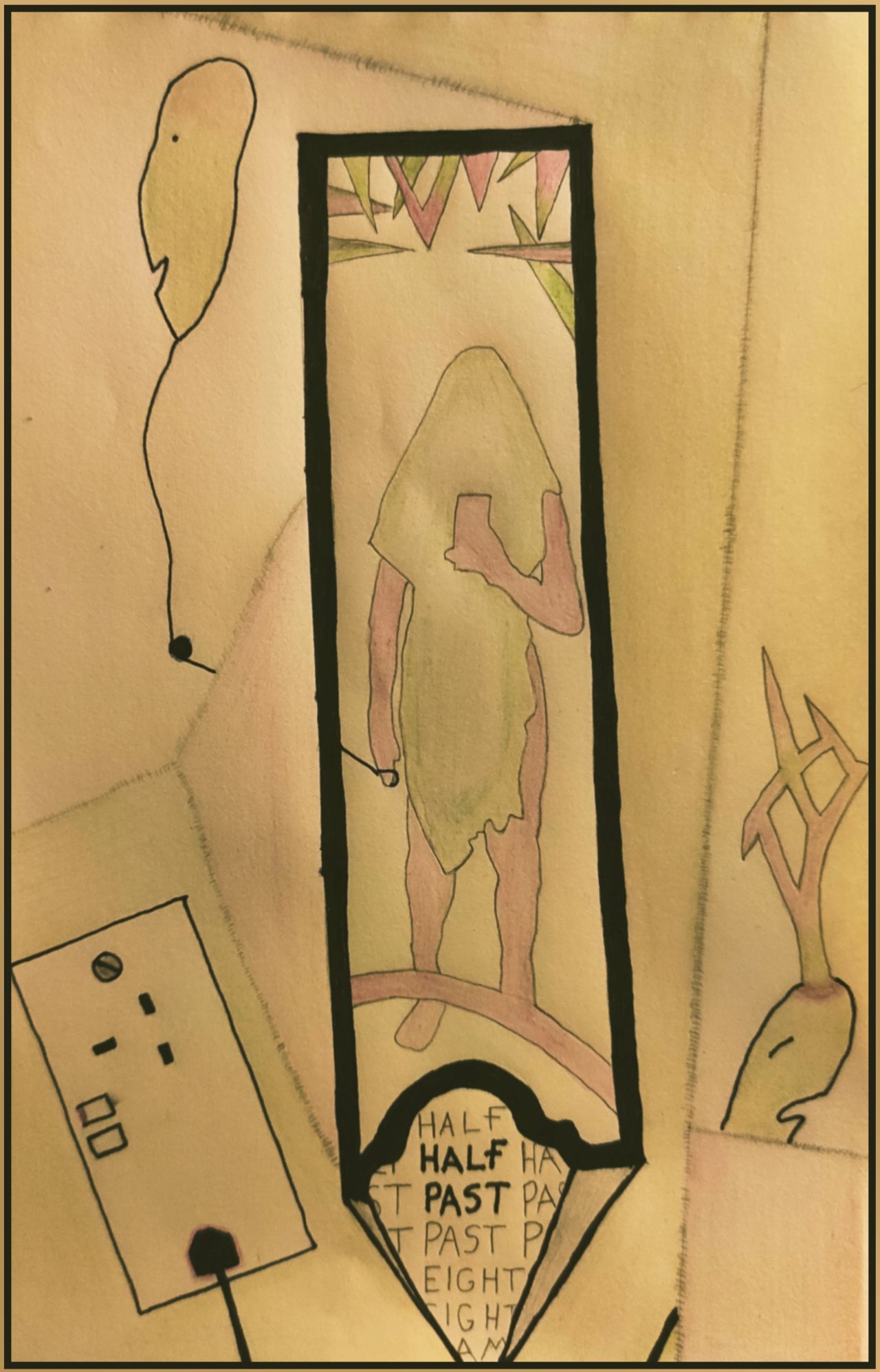 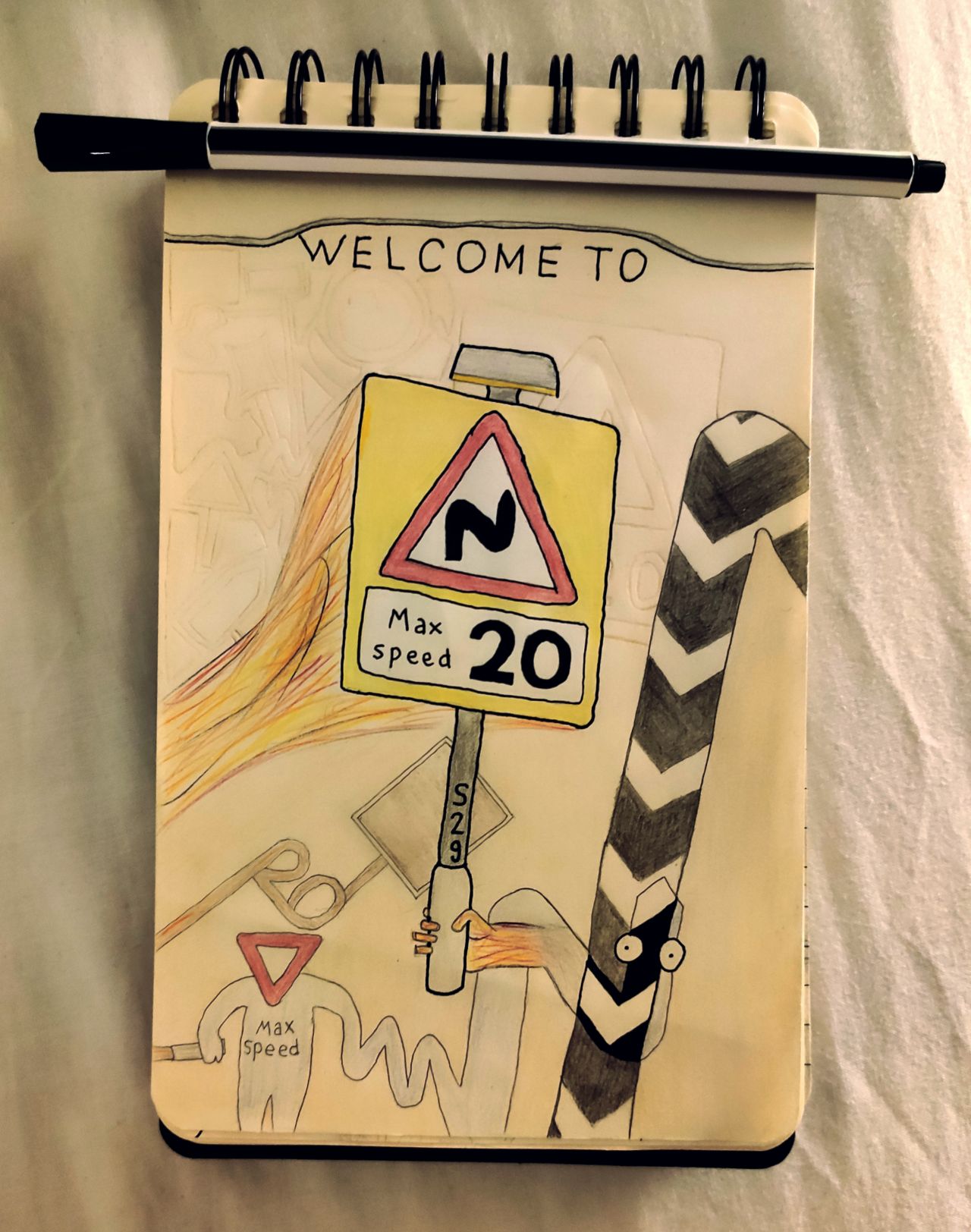 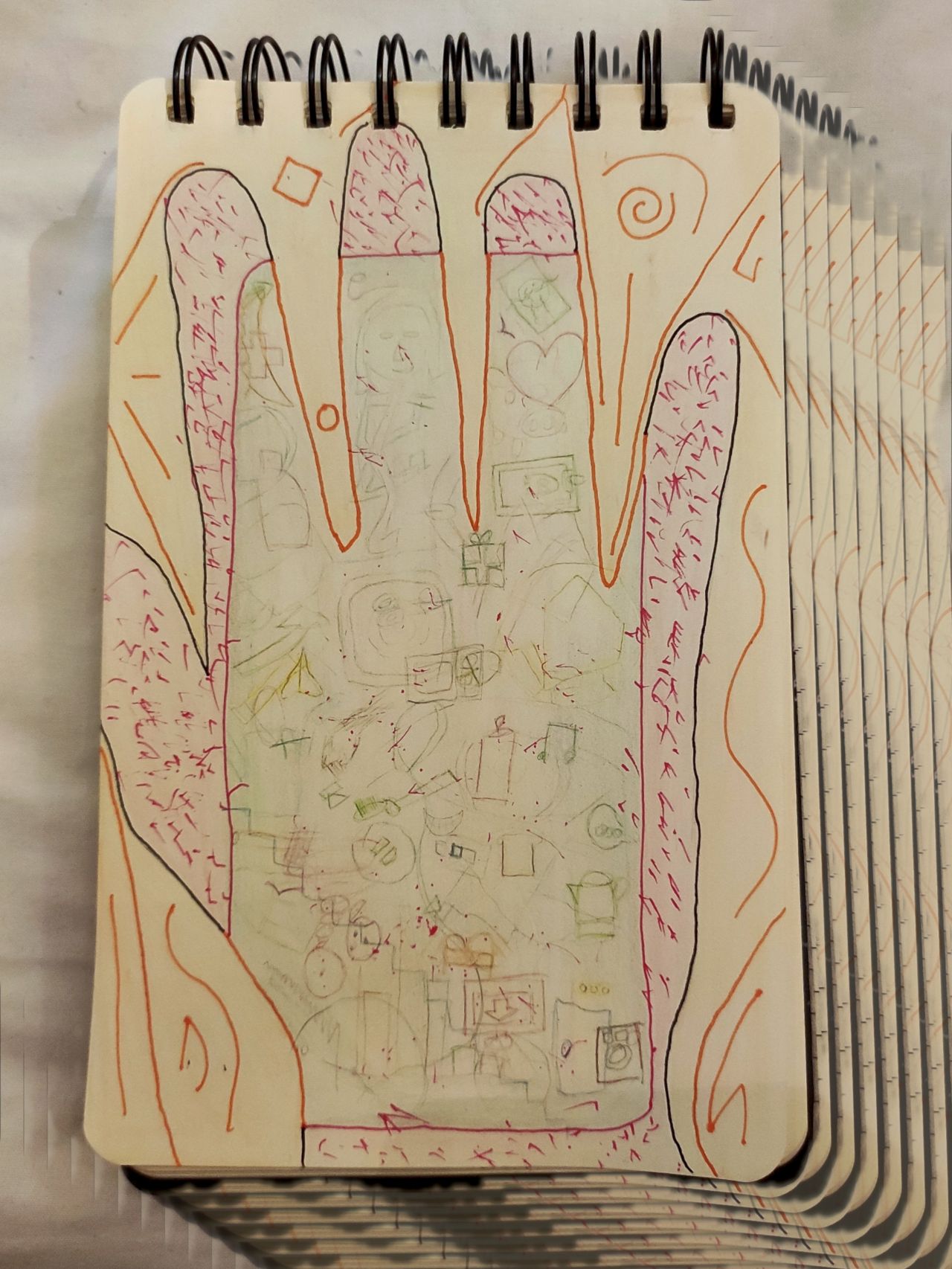 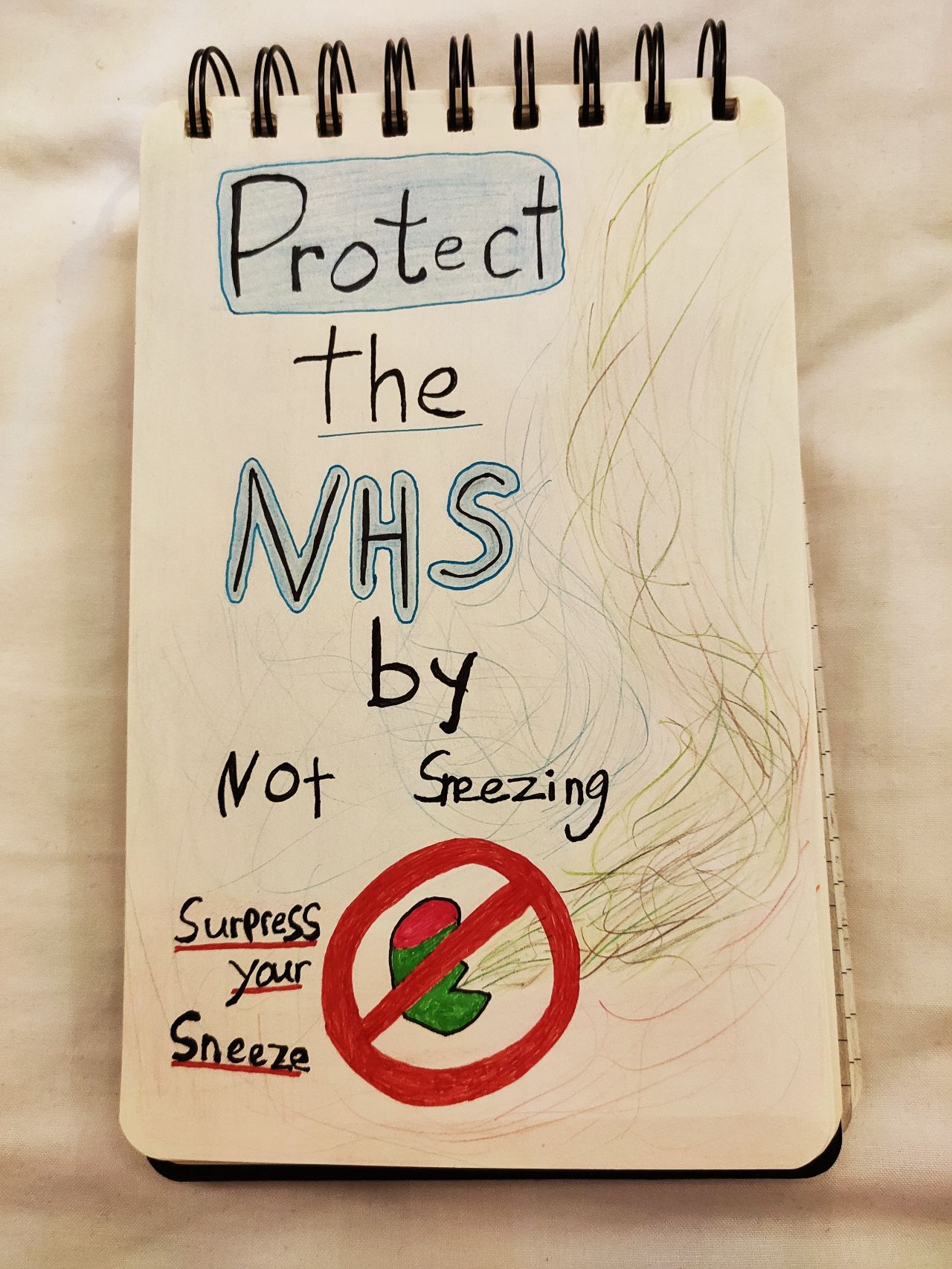 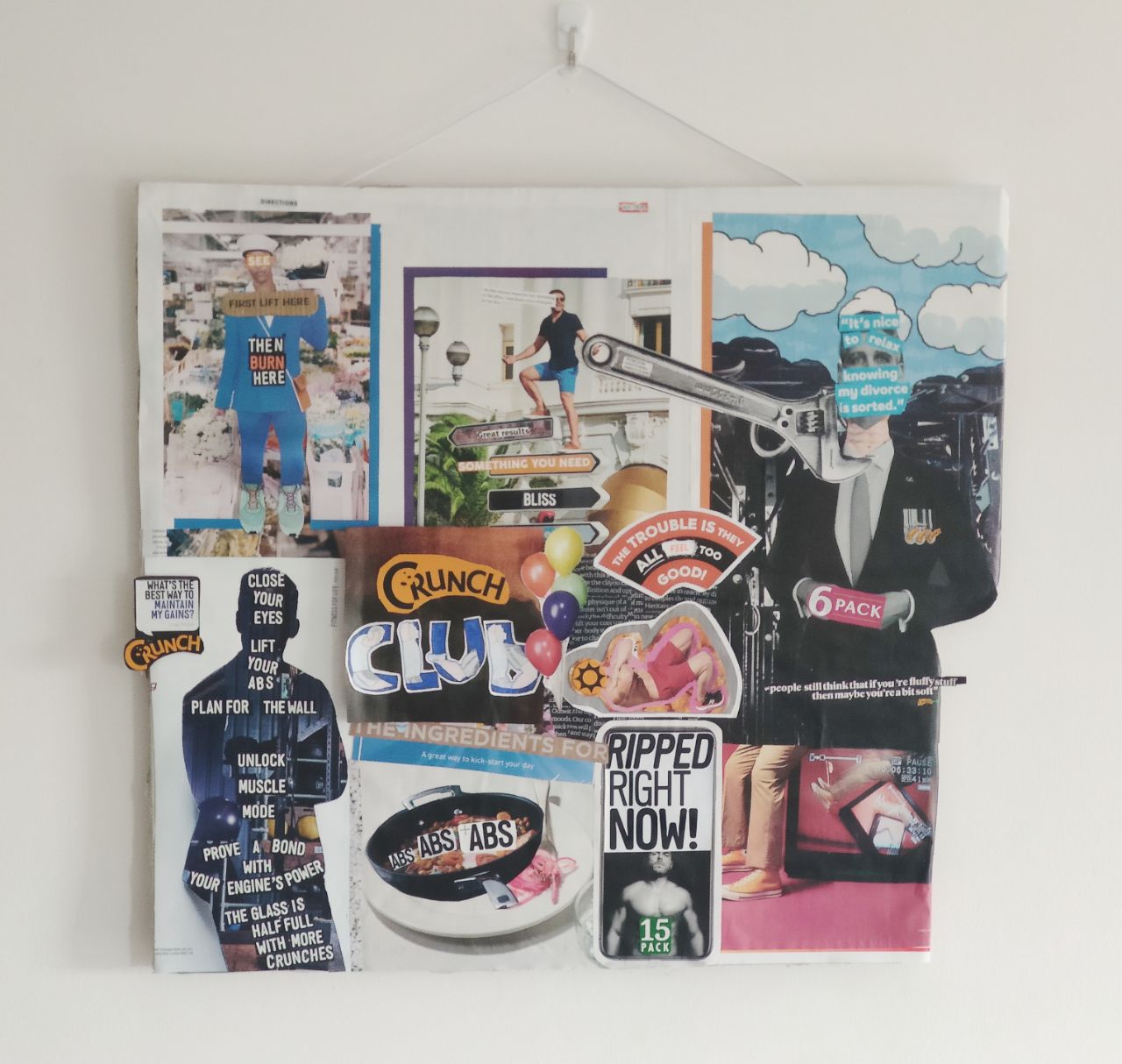 June Matt on the phone 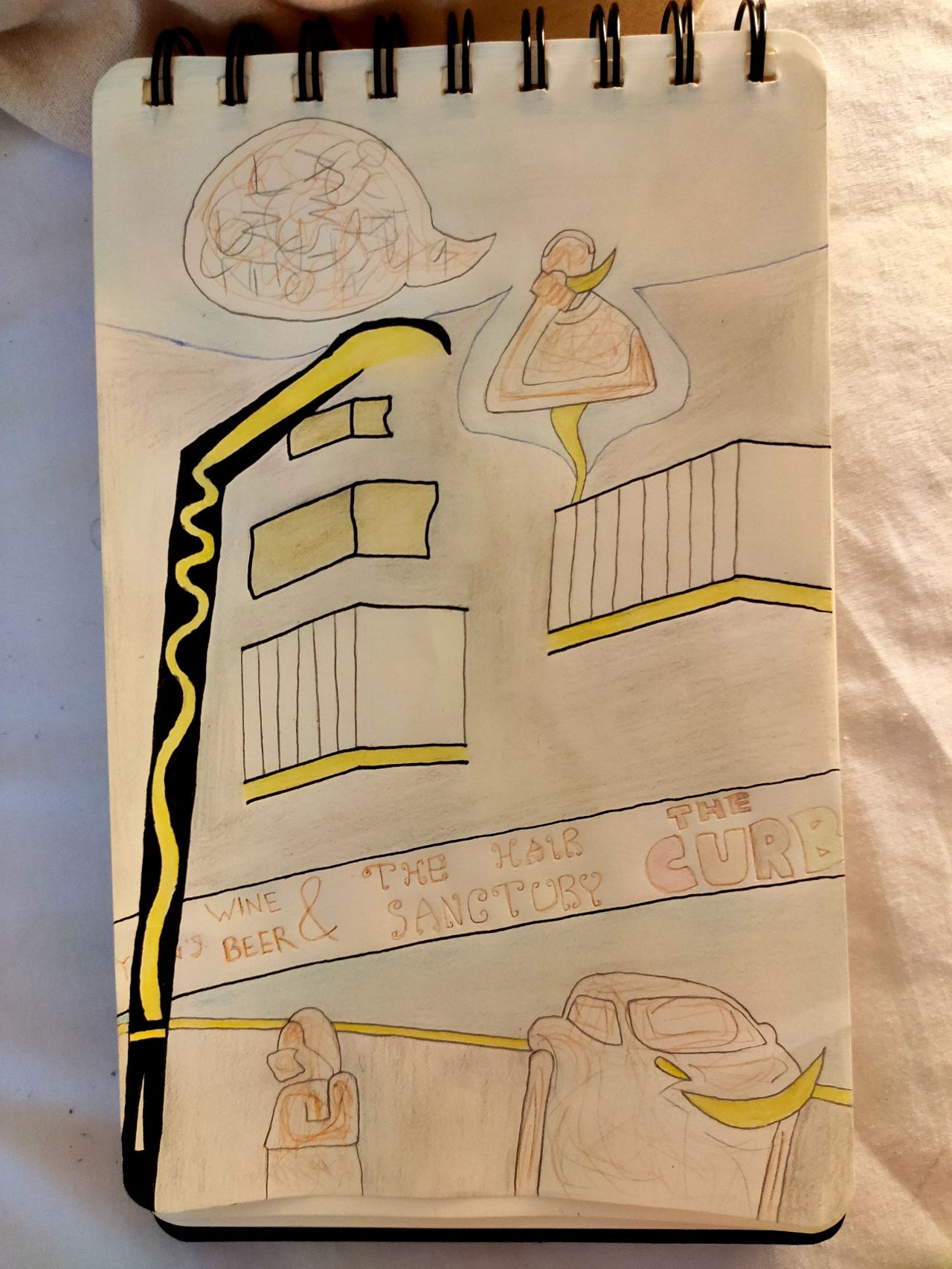 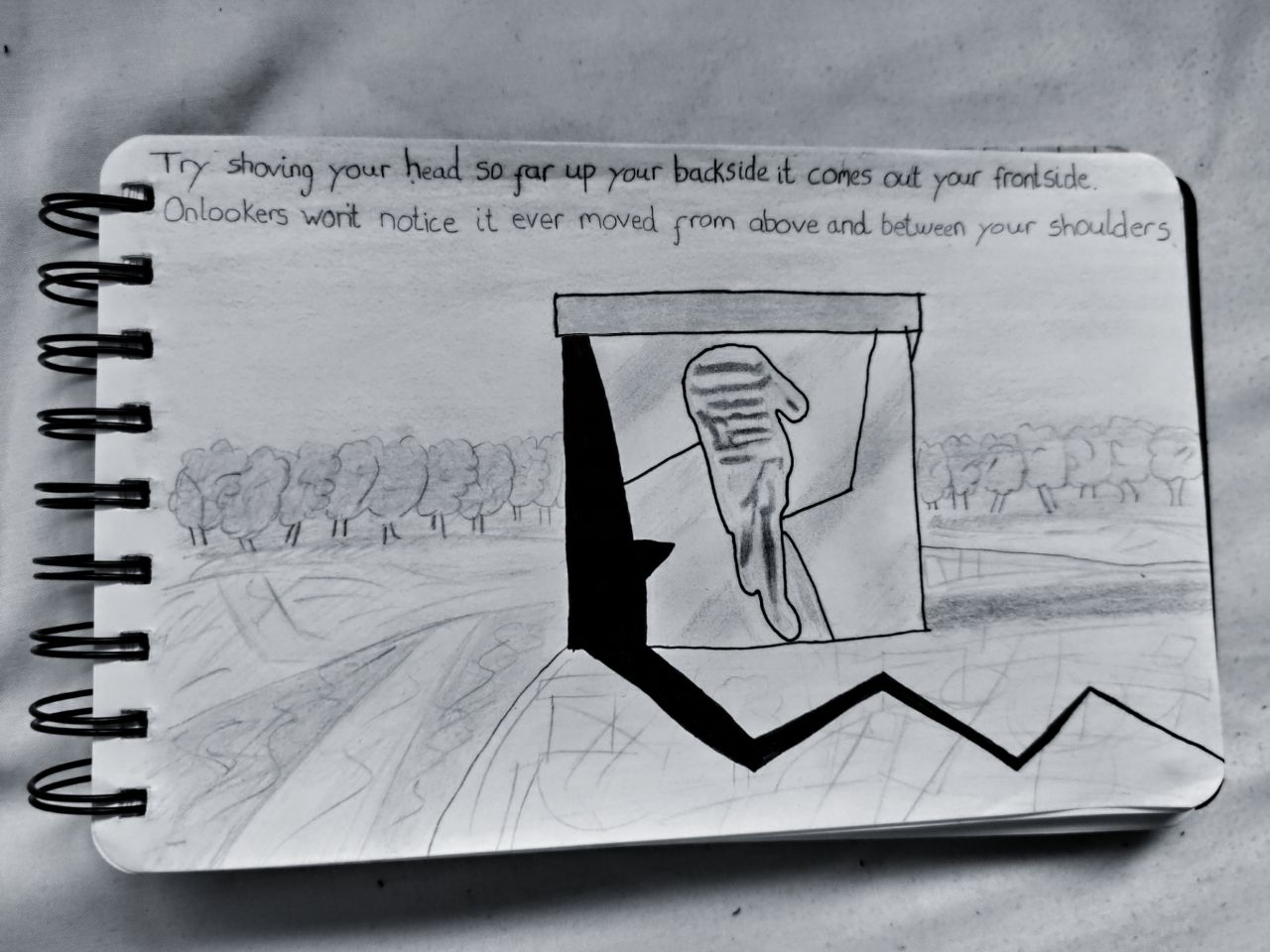 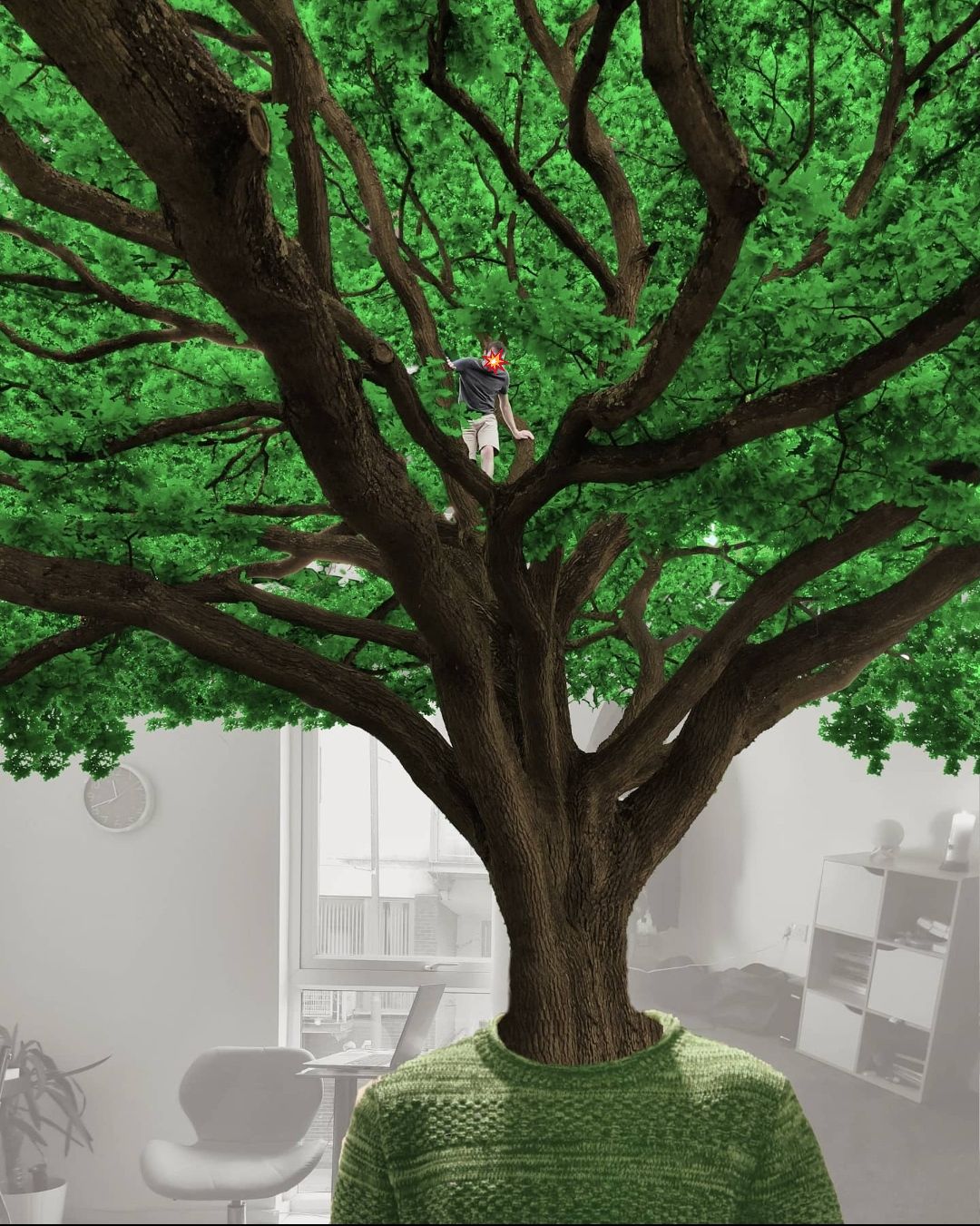 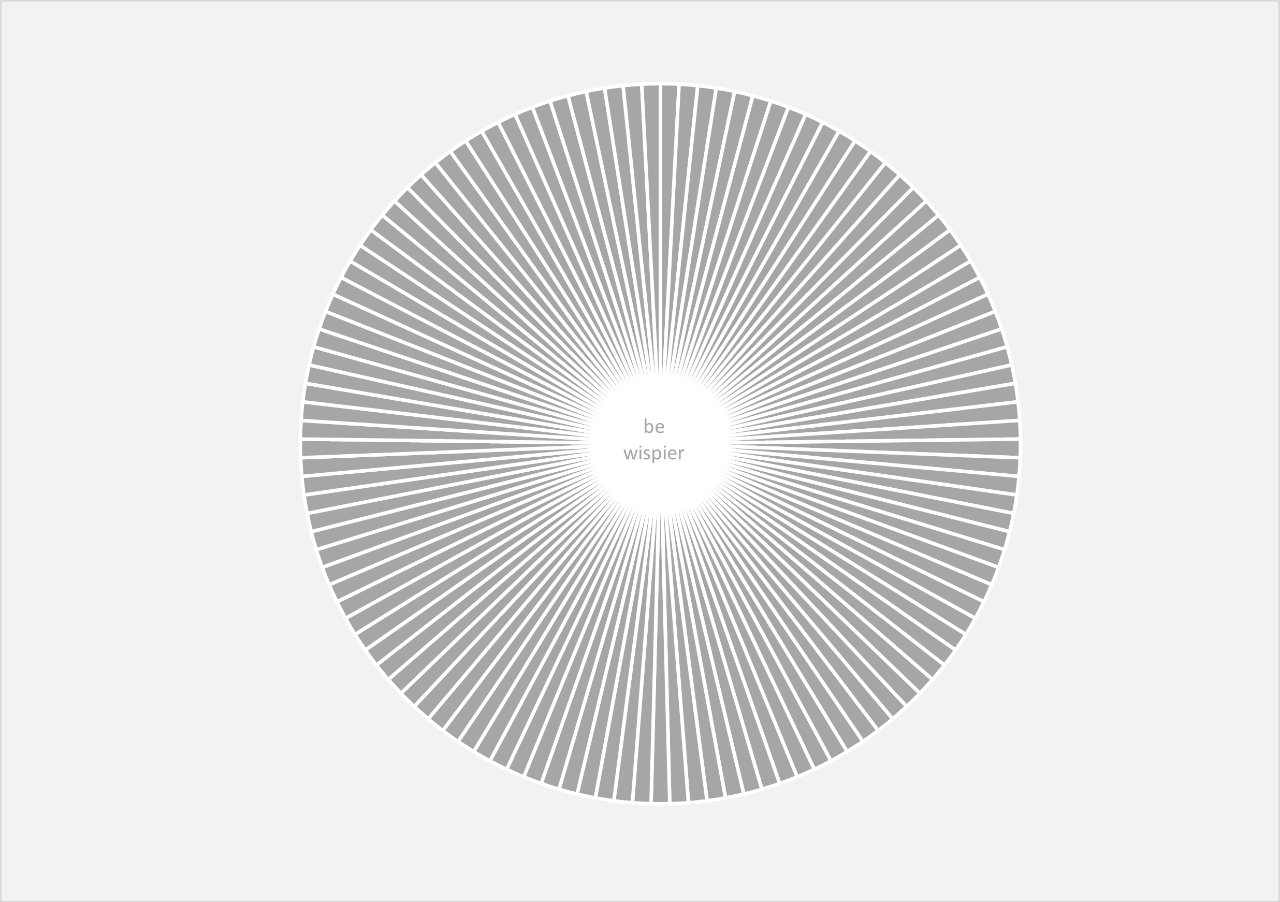 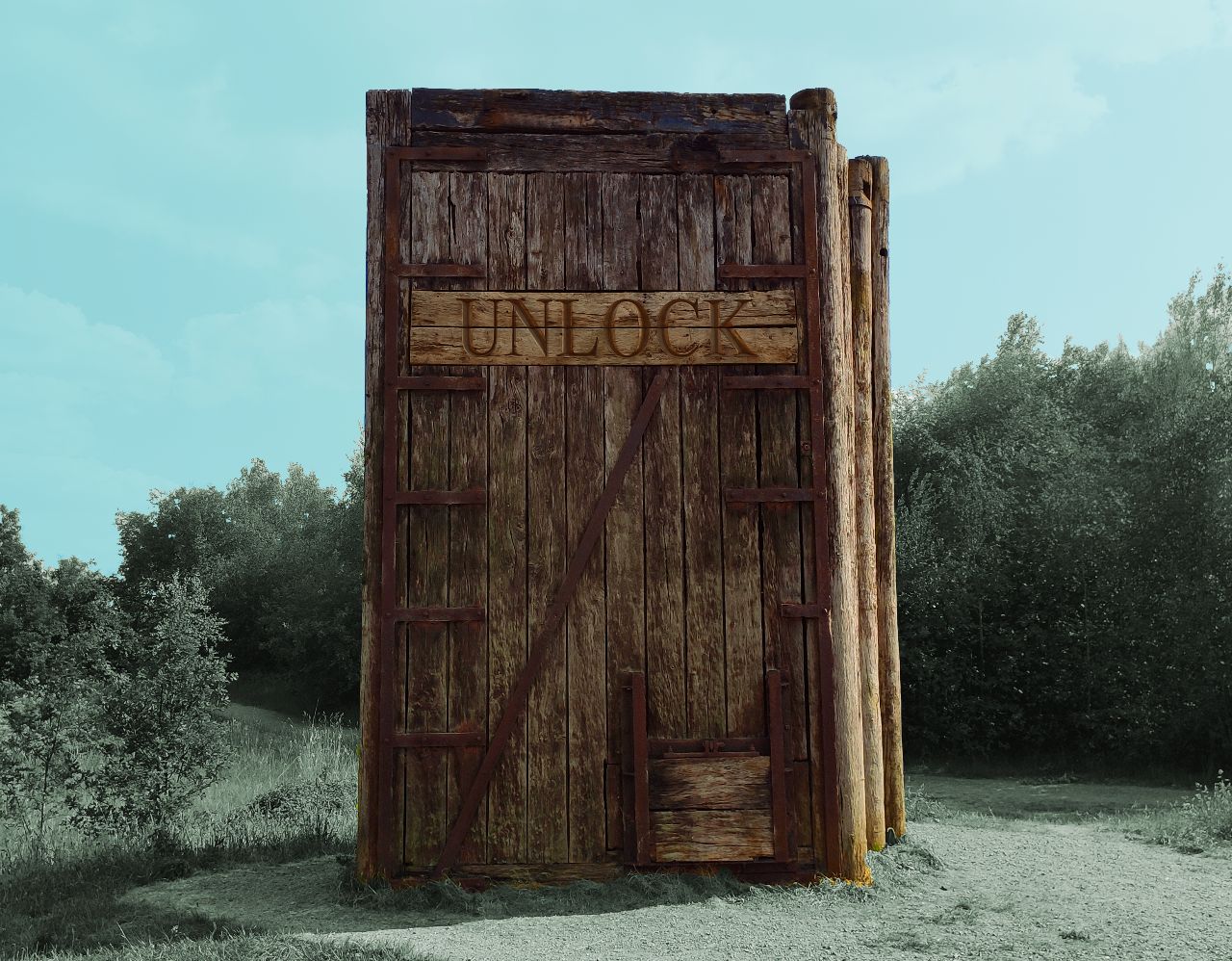 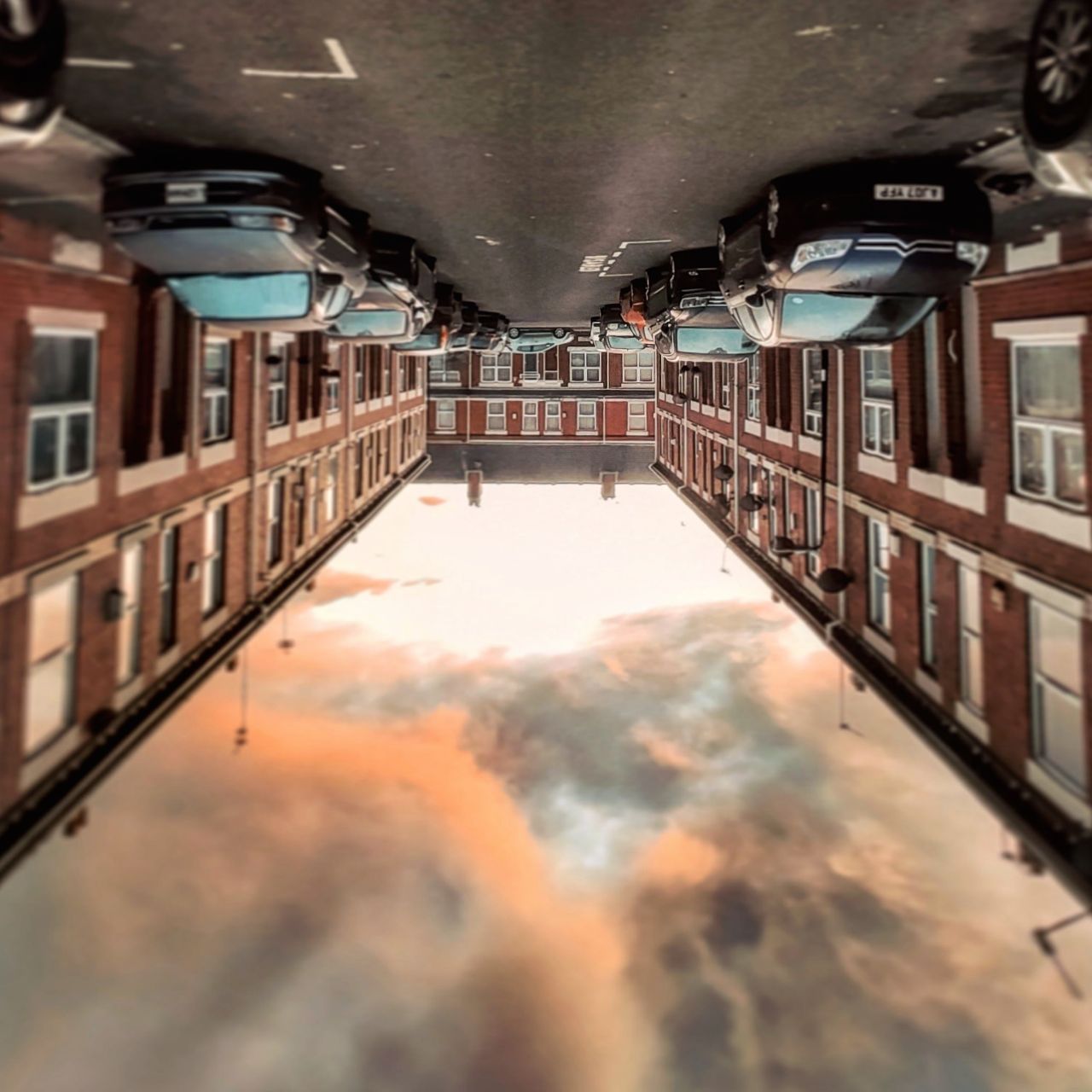 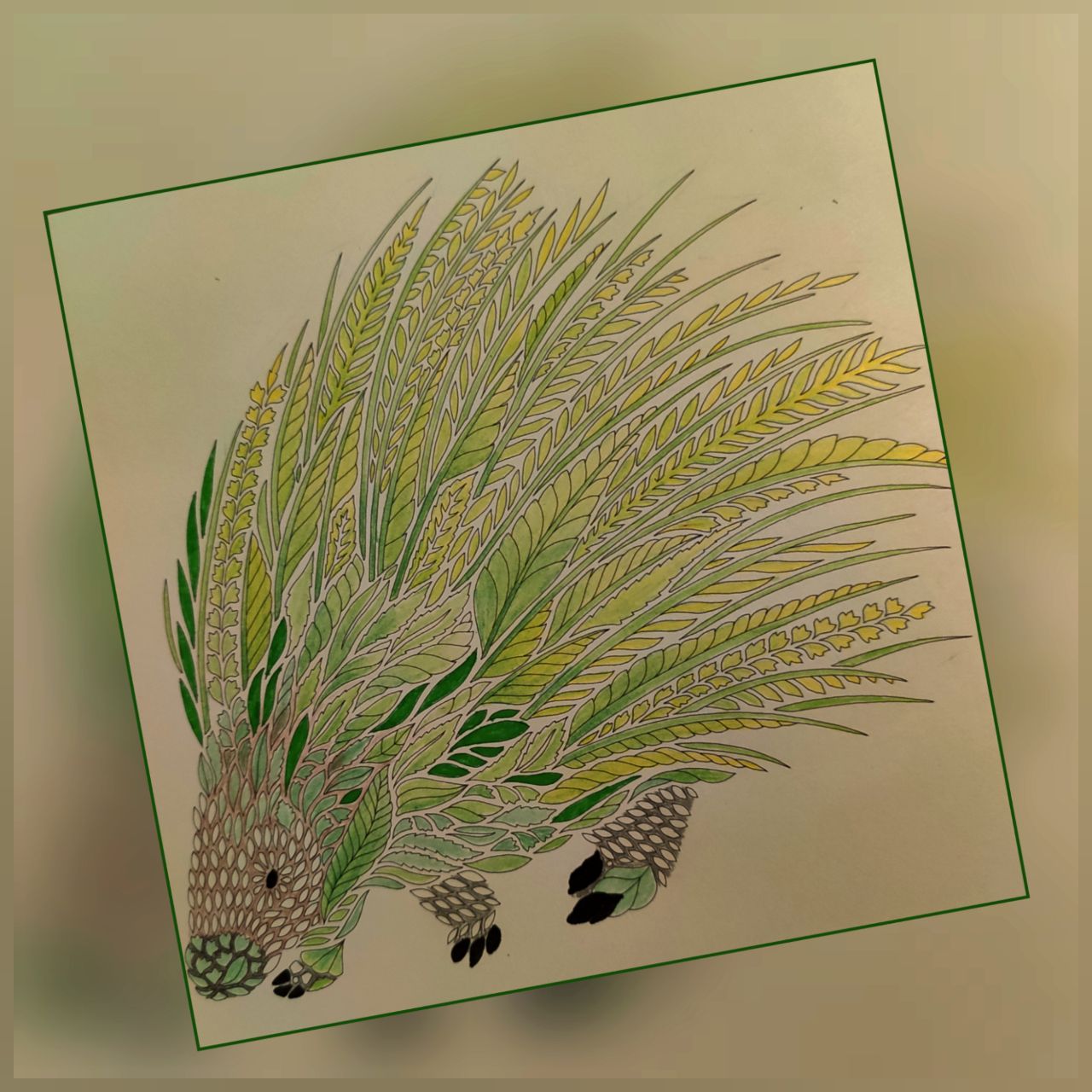 Opposite my faux leather office chair, there's a block of flats guarded day and night by a thick metal door. Residents passing through rarely linger long in its frame, sometimes standing so to stop it swinging shut whilst they beckon in a companion or takeaway. Based on evidence gathered from my first floor vantage point, I would have postulated that the door was conventional, but there's a caretaker who'd disagree.

The caretaker, evidently a man of diligence, won't go through it without peering closely at the closing trajectory. Once closed, he'll often open it again gently, closely leaning in towards the fastening mechanism. After repeating a couple of times he'll go on his way with a deeply furrowed brow. He never tries to fix it. He is just fixated by it.

Even in preoccupation the door haunts him. Whilst briskly marching through the frame, the door comes slowly to a close behind him. He's probably on the way to take care of another part of the building. I watch eagerly as I know that in a climactic flash his head will always swivel around at just the right moment to see if the latch attaches the catch. I don't think he'll ever fix, avoid or understand this troubling door. Nor do I know why it's happened like this.

I sit, in my faux leather office chair, watching things like caretakers and fingertips that float across the alphabet on my keyboard. I swivel, in my faux leather office chair, often towards the kitchen, forgetting about making a cup of tea until I remember to. By which time, it's almost been made and affairs of some kind have been mentioned. I don't know why it happens like that.

So semblant So sealed So entrance Unpeeled To the brink To the feel In the morning In the night The pressure Pressed tight An explosion And alive, she's alight So laughing At the sun So grasping At the fun So darting To the left So smiling So undressed I'm the worst I'm the best A blessing, a curse Watch me Perverse

Watch me Just watch me

My screaming She is wry My battle She is crying Warnings're boring, hardly unkind Softly Unwinding On carpet On the floor Atmosphere Torn more Sure implied What is known Untethered What is seams Not knowing What it means and flat, sidling And sidled, and flat And sidling, and sat And sidled

You can catch me blinking in the hallway or saying definitely nothing to an elsebody. The line between thinking and speaking is usually connected, like the passing thoughts I have about you. Thinking without saying's vice versa is tantamount to throwing eyeballs at walls, where they become part of the paintwork. My self assurance has grown dangerously. If we liaised online soon, I could perform to you what has become of my poise. Sometimes people ask me if I want to go back to the office. I'm ambivalent.

I've found the closure of pubs and restaurants to be somewhat liberating because it's given me free time to explore Manchester by bike. On sunny weekdays I'll be spontaneous after work, deciding a destination once already on the road. At weekends I might bike further with a picnic and partner in crime (I mean 'crime' literally because she's from another household and 'partner' figuratively because of commitment reluctance). If you ate the compass of Manchester, it would taste a little like what you're about to read.

North On the steep journey towards Manchester's highest point, a cordoned-off observatory called The Temple, Manchester's small handful of skyscrapers disappeared behind us as we transitioned past sleeping bougie bars, then bustling international shops and Synagogues. The destination bench looked out further north past two thick forests that were like opened theatre curtains revealing a green stage miles deep. It provided a moment of sitty dwelling to forget about my city dwelling. The moment was brief because the chaotic escapism of everyone else was within earshot.

East One Friday night destination was Sportcity, an area made from stadiums and concrete. We took full advantage of its abandonment by riding down a long bridge at speed onto the empty perimeter of the Etihad Stadium. We did this twice and took pictures. I felt like I was living the life of a young person because in those moments I wasn't doing much else.

South The busiest bus corridor in Europe has a dedicated cycle lane from which I almost feel like I can tour my impending trajectory. The University campus is prominent but quickly behind me and before and long I'm passing suburbs each seemingly inhabited by those a decade older than in the one before. Before my eyes, the houses detach from each other, birthing between them impeccable hedged barriers which one day I might spend my time attending. I sigh at the predictability, shudder at the privilege, but look forward to the kitchen space.

West A lot of the main roads coming from the centre tend to incline themselves upwards. We were so pleased at discovering the flat canals as an alternative, we accidently cycled to Wigan and, another time, Warrington. As casual cyclists our trips haven't been about covering distance or planning efficient routes. They're more about eating meal deals and showing appreciation of the empty path and day ahead by saying something like